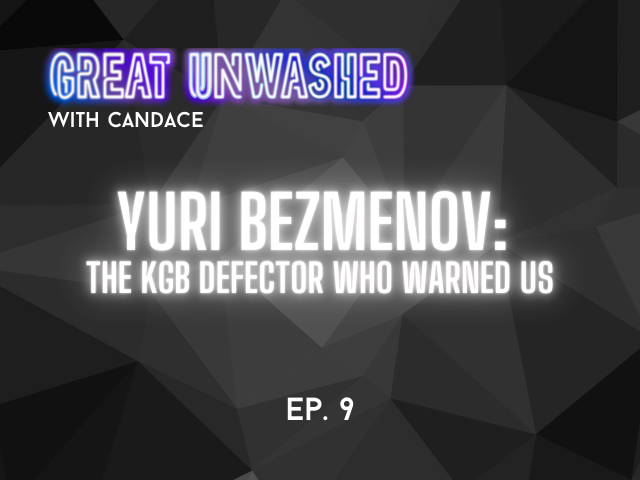 You have likely stumbled upon short clips from a 1985 interview of the KGB defector, Yuri Bezmenov, warning the American public of the KGB's psychological warfare operations against the United States and other democratic countries.

Yuri was a former propagandist for the KGB. His father was a high-ranking general in the soviet army. Yuri's father was one of the few officers who was allowed to bypass the KGB altogether. Instead, he reported to the Minister of Defense, which was rare.

Yuri mentions that while his father worked as a Soviet general, he was a Russian patriot. And though he never saw the Soviets for the oppressive force they were, Yuri attributes his father's level-headedness to the fact that he was permitted to go above the KGB.

Because of his father, Yuri was afforded more luxuries than most living under the Soviet system. He was educated in the most elite schools and was recruited by the KGB. Throughout his youth, he has been led to believe that the US was planning on attacking the USSR. Yuri remembers America going from an ally, helping defeat the Nazis, to being the Soviet's biggest enemy overnight.

During his time with the KGB, he took on several roles. Part of his job was to meet with foreign journalists and intellectuals, "political prostitutes," as he called them. From the moment they landed at the Moscow airport, Yuri ensured they were intoxicated throughout their stay to make it easier to brainwash them with Soviet ideas. Ultimately, he moved to India to work in the Soviet embassy. Part of this tactic included occasionally withdrawing alcohol from them so that they would get the shakes and begin to feel guilty as they tried to remember what they had said the previous night. He stated that this was the best time to approach them with propaganda.

These journalists and intellectuals that were invited to visit the Soviet Union were all preselected. They went through a vetting process first. The KGB wanted the guests to believe they were chosen because of their unique intellect, but in reality, the USSR felt they were "useful idiots," as Yuri Bezmenov puts it. The Soviets were confident that these particular individuals would believe their propaganda.

Yuri tells a story about journalists who were given a tour of the Soviet Union. They took pictures of what they believed to be children playing in a schoolyard and published the photo labeled as such in a Canadian magazine. It wasn't a schoolyard but a children's prison for those whose parents were political prisoners.

He also mentions the photos of Edward Kennedy shown dancing at an "authentic" Soviet wedding. Yuri states that most, if not all, of the guests at that wedding, would have had USSR clearance and training on how to speak with foreigners. There would have been nothing
authentic about it, it's just, as he states, a "circus performance."

While the general public was being led to believe that the Soviet concentration camps had ended after Stalin, Yuri claims this is not the case. He says there are fewer political prisoners, but they still remain. And if he had to guess, there are still close to 25 to 30 million people in the labor camp system.

Bezmenov also mentions being assigned to Look magazine in 1967, which was popular among American audiences. He states that from the first page to the last, it was a "package of lies."

While he had many reasons to enjoy the socialist system, he started to question and develop split loyalty after moving to India to work at the embassy, where he became an expert in culture and language. He fell in love with the country and its people. Over time, Yuri realized that the Soviet system was "a million times more oppressive than anything in the west." He felt the system was racist, exploitative, perpetuated slavery, and economically inefficient. Bezmenov realized the USSR was attempting to use India and bring a new type of colonialism to the country that was far more oppressive.

Yuri was a press officer in New Dehli when he started to create a plan to defect from the KGB and the Soviet Union. He knew that the Soviets had formed a pact with the Indian police, so if someone tried to defect, the police would report it. If caught, he would either be thrown into a concentration camp or quietly executed. To make matters more complicated, he had a wife and a baby. His wife was completely unaware that he was working with the KGB.

Yuri talks a bit about marriages in the Soviet Union. For example, he says, to be a part of the KGB, you are more or less forced into a marriage of convenience because you are to spy on one another to ensure the other won't defect. And he had to marry to get assigned to any foreign operations. In other words, he would not be allowed to go off to another country by himself; this couldn't be trusted. So he had to have a Soviet-approved wife to keep an eye on him.

Bezmenov decided that he had to defect when he discovered a list of people the KGB planned to execute once the revolution started. It included journalists he had become friendly with, but the KGB felt they knew too much and therefore needed to be eradicated when the time was right. This realization made Yuri mentally and physically sick to learn. He realized that the Soviets were "basically a bunch of murderers." He describes them as "thugs in a country that is hospitable to us."

Yuri expresses frustration at this stage because he begins to try to warn people in convert ways, but no one wants to listen. He attempted to sneak information, but no one wanted it, not even in India's conservative mass media.

So what did he do to escape? Well, he hid. At the time, a prevalent hippie culture was happening in India, which included a lot of Americans. So he studied them, where they hung out, and what they smoked. And eventually, he disguised himself as one of them to avoid detection. Ultimately this worked.

In 1970, he made it to the US. But, first, he had to participate in a six-month debriefing in Athens by the CIA, where they granted him the ability to go to Germany. From there, he was able to go to Canada. He was not interested at the time in moving to the United States because he was concerned about being outed by a double agent. So, he decided to settle down in Canada with a new identity.

Five years into Yuri's new life in Canada, the KGB finds him because he's working in broadcasting and telling his story. Unfortunately, the KGB was monitoring the speakers, and they discovered him. So they decide to attempt to discredit him, and they complain to the Prime Minister of Canada, who is "known to be a little bit soft on socialism."

The Prime Minister listens to the KGB and initiates an investigation into Yuri Bezmenov. They conclude that the things Yuri is saying on this broadcasting network are offensive to the Soviets, and he's forced to quit. Meanwhile, the KGB is trying to intimidate Yuri to get him to stop any political activity or commentary.

Yuri Bezmenov felt that the most dangerous part of the Soviet Union was not the military because they'd be more sensible negotiators. But instead, it was the KGB, the party elites, and communist party bureaucrats. He knew that the military force was nothing compared to the power of their ideological subversion.

So, what is ideological subversion? Yuri defines it as a legitimate, overt brainwashing process that you can see with your own eyes, void of any mystery. He states that the main emphasis of the KGB is not intelligence, but rather 85% of their attention goes into the slow process of ideological subversion, active measures, or psychological warfare.

If you have seen snippets of this interview, this would likely be the part you're familiar with. Yuri Bezmenov goes through, step-by-step, each phase of ideological subversion.

Yuri admits that leftists are pivotal in this process. They are necessary for this revolution to take place. However, not for long. The reason that the KGB had a list of journalists they would execute once the revolution began was not just because they knew too much but because they would eventually turn into the enemy.

Leftists only serve a purpose in the second phase of destabilization. People such as professors and civil rights defenders help to create instability within a society. However, when the job is complete, they know too much. Leftists will become disillusioned when realizing that they will never be the ones to come to power, but they are only useful idiots temporarily. Yuri states that history reveals they will turn into the most bitter enemies, which happened in Nicaragua, Grenada, Afghanistan, and Bangladesh. The moment the leftists had served their purpose, they were executed or imprisoned. Eventually, someone more Marxist than them comes along to remove them from their position.

Bezmenov explains that the KGB felt they should not bother with leftists because they would eventually turn against the party. Instead, it would be much more effective, long-term, to infiltrate large circulation establishment conservative media. The KGB insisted on finding rich, influential people who lacked moral principles and were greedy and self-absorbed.

Yuri insisted that the United States is in an undeclared total war over the basic principles that America is founded on. And the initiator of this war is the "world communist conspiracy."

He mentions that the average Soviet citizen does not like the USSR system. And while they may not completely understand their reasons, there are very few people who are consciously supporting the Soviets.

Yuri expressed that he was somewhat confident that the system would collapse because it relied too much on intimidation and lacked loyalty.

However, keeping it alive were the democratic countries choosing to do business with the Soviets. He mentions that other countries must stop providing the USSR with credits and aid. Yuri says that even the Soviet citizens would be "eternally grateful to you if you stop aiding their totalitarian government from oppressing them." Additionally, he states that America needs to prioritize a national effort to teach patriotism, to explain big brother government and communism.

What's Yuri Bezmenov's reason for leaving his easy life in the Soviet Union, risking defecting, just to warn the west? He says his reason is survival, "I'm not in your boat, there's nowhere else for me to defect to." And that America is the last country of freedom and possibility.

Yuri states, "Educate yourself, you are not living at the time of peace, you're in a state of war."

"Deception Was My Job" or "Soviet Subversion of the Free World Press" (Complete Interview)
https://www.youtube.com/watch?v=jFfrWKHB1Gc