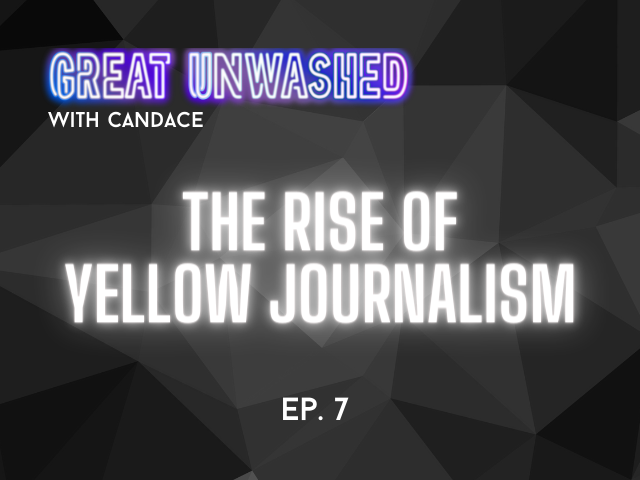 The Rise of Yellow Journalism

Today, our media is packed with clickbait headlines, anonymous sources, and sensational imagery. It appears as though journalistic integrity has slowly been worn away over the years, motivated only by what garners the most views, even if it has to be fabricated from thin air.

Once upon a time, American media was filled with journalists and reporters who cared about uncovering the truth in every story and exposing corruption. So, there must have been a point where truth and integrity were forced to take a backseat. Right?

Arguably – no. Looking back through the media archives suggests that politics and self-interests have always tainted news. At the very least, we can trace this lack of honest reporting back to the late 19th century, specifically the 1890s, with the rise of Yellow Journalism.

"Such journalism had the following characteristics:

Joseph Pulitzer and William Randolph Hearst are considered the fathers of this profit-driven reporting style.

Pulitzer worked his way up in his journalism career by first accepting a job with the Westliche Post. By 25-years-old he became a publisher and moved on to purchase his first paper, the St. Louis Post-Dispatch. By 1883, he bought the failing New York World and, in just two weeks, increased the circulation by 6,000.

Pulitzer replicated the success he created with the St. Louis Post-Dispatch, utilizing provocative stories and a unique layout to attract more readers to the New York World. As the city grew, so did the paper.

William Randolph Hearst, the only son of a wealthy mining tycoon, admired Joseph Pulitzer for his success. Only 24-years-old and drawn to journalism himself, Hearst convinced his father, the owner of a failing San Francisco Examiner, to give him control of the paper.

Hearst followed Pulitzer's lead, pushing the envelope with sensational headlines and bold visuals. He spared no expense, hiring the best writers he could find, including Mark Twain, Ambrose Bierce, and Jack London. The success of the Examiner allowed him to purchase the struggling New York Morning Journal in 1895 – and so, the New York circulation war between Pulitzer and Hearst began.

Both men became known as champions for the average working-class American for using their papers to expose government corruption and unjust working conditions.

Pulitzer's New York World was beloved by readers for its bold colors and, specifically, one particular iconic cartoon, Hogan's Alley. The comic featured a child dressed in yellow, hence the origin of the name, Yellow Journalism.

In 1896, Hearst presented the cartoonist of Hogan's Alley, Richard F. Outcault, with an enticing offer to join his paper. This proposal catalyzed an intense bidding war between Pulitzer and Hearst, resulting in Outcault moving to the Morning Journal, where he created a new yellow cartoon copycat. Not wanting to give up on the comic, Pulitzer hired a new cartoonist to continue the original Hogan's Alley.

At the same time, tensions were rising between Spain and Cuba. A story that both Pulitzer and Hearst often exploited to capture more viewership for their papers. Always striving to be the first to break the latest developments in the story, the two became known for exaggerating reports and retracting later.

Their provocative style hit its peak in 1898 when a US battleship in the Havana harbor mysteriously exploded. The blast caused massive damage to the hull, and the boat sank.

Since Hearst and Pulitzer were already profiting from provoking tensions, and neither one wanted to be late to report new findings, both released unfounded articles insinuating the explosion might have been a plot by Spain. This accusation was later disproven by a US Naval Investigation.

Regardless, the rumor caused the American public to put additional pressure on the government to declare war on Spain. While neither Hearst nor Pulitzer are solely to blame for the start of the Spanish-American War, they certainly contributed to the tension.

The conservative press pushed back on Pulitzer and Hearst, launching a boycott of their papers for lack of journalistic integrity. This effort only succeeded in removing the newspapers from the public library and a few other relatively insignificant locations. Ultimately, their efforts backfired, and the readership of the New York World and Morning Journal increased. Within a decade, nearly every paper mimicked their style with creative drawings and misleading headlines, particularly during election days and crises.

Following the war, Pulitzer is said to have withdrawn from using the Yellow Journalism tactics he created. Later in life, he sold his paper and donated $2 million to help fund the new Columbia School of Journalism. In 1917, the first Pulitzer Prize was awarded.

In 1904, in The North America Review, he wrote, "Our Republic and its press will rise or fall together. An able, disinterested, public-spirited press, with trained intelligence to know the right and courage to do it, can preserve that public virtue without which popular government is a sham and a mockery. A cynical, mercenary, demagogic press will produce in time a people as base as itself. The power to mould the future of the Republic will be in the hands of the journalists of future generations."

By 1930, William Hearst had grown into America's first media tycoon, with over two dozen papers, magazines, photography services, radio stations, film productions, and more. All five of Hearst's sons followed in their father's footsteps and began careers in media. And, as fate would have it, in 1955, William Randolph Hearst Jr. was awarded a Pulitzer Prize for his newspaper reporting.

"Yellow Journalism: The 'Fake News' of the 19th Century"
https://publicdomainreview.org/collection/yellow-journalism-the-fake-news-of-the-19th-century