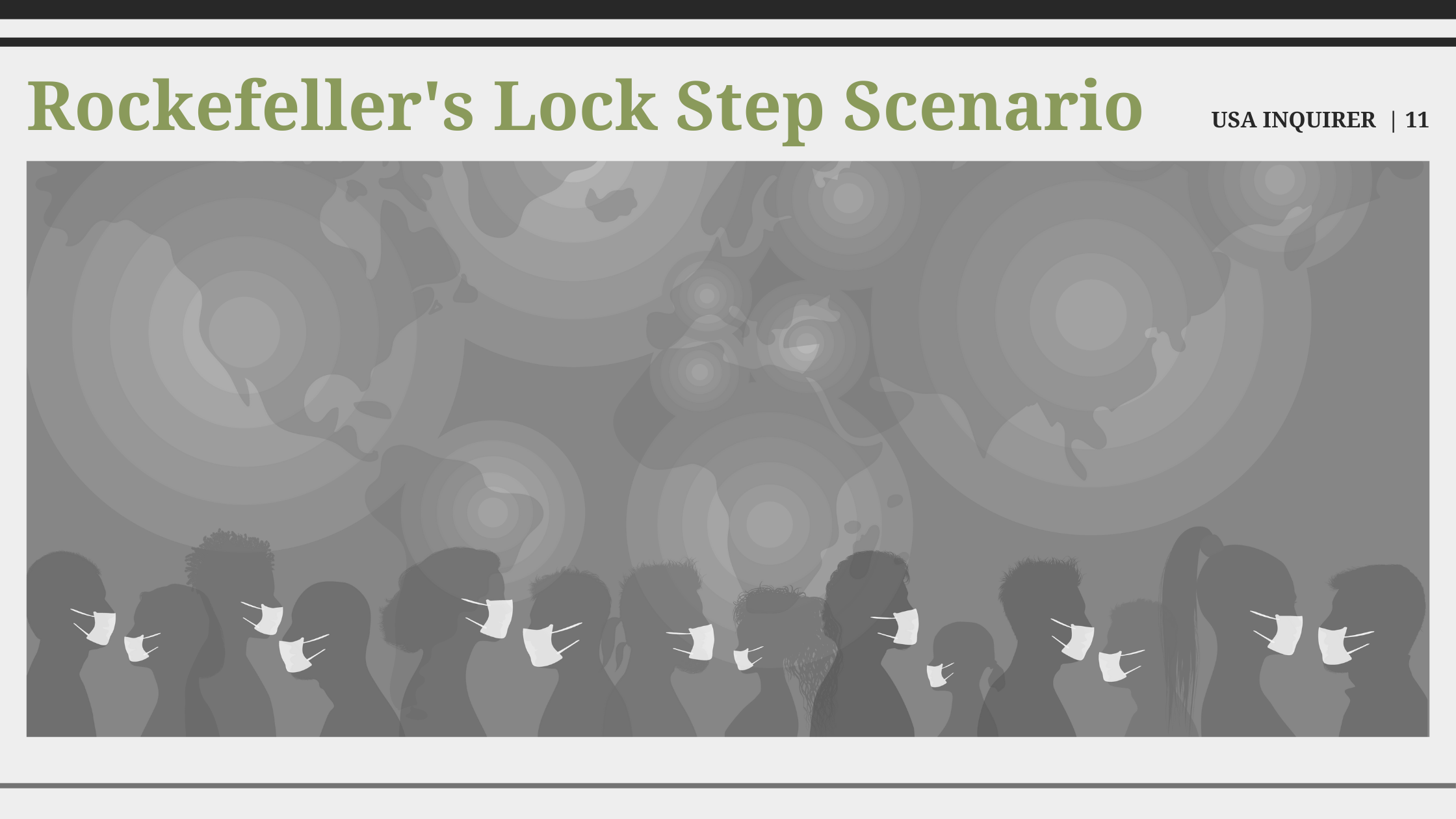 If you've stumbled at any length down the rabbit hole of conspiracy theories, you would have heard of "Operation Lockstep." And, if you aren't familiar, it may be of interest to you to look into. However, like most conspiracy theories/facts, or just any opinions that lean even slightly right of far, faaar left, it's been "debunked" by these (definitely not biased) fact-checkers. But, is this theory actually debunked, you know, with facts that are explained in detail, or did they just slap a "debunked" sticker on it and hope no one would read past the headline?

Beginning with Snopes fact-checked article that outlines what Lockstep is and why they believe you shouldn't pay any attention to it:

"In 2010, The Rockefeller Foundation produced a report entitled 'Scenarios for the Future of Technology and International Development' that envisioned how the world would be impacted in four different scenario narratives — one of which dealt with a global pandemic. This document gives a hypothetical look at future events in order to envision possible problems that might arise. While this document does explore how the global population could react during a pandemic, it is in no way an 'operation manual' for how to manufacture a virus in order to implement a police state."

The question that Snopes is attempting to debunk is, "Was the COVID-19 pandemic planned in Rockefeller's 'Operation Lockstep'?" Already, that's a little misleading and off-track. The argument isn't – does this report prove that COVID was planned? No, it would be a more accurate question to ask – does this report plan and justify how world governments could seize totalitarian power using a pandemic as an opportunity?

If the question was appropriately asked, to reflect the accusations skeptics are alluding to, would it be possible to debunk?

"Scenarios for the Future of Technology and International Development" was created in 2010, the product of a year-long project out of the Rockefeller Foundation and Global Business Network, "designed to explore the role of technology in international development through scenario planning, a methodology in which GBN is a long-time leader."

While this may not be a "playbook," per se, it was for "scenario planning." Semantics, right?

"Importantly, scenarios are not predictions. Rather, they are thoughtful hypotheses that allow us to imagine, and then to rehearse, different strategies for how to be more prepared for the future—or more ambitiously, how to help shape better futures ourselves."

Right from the start of the report, it's clear that part of the research goal was to learn how to "be more prepared" and strategize.

As Snopes stated, Lock Step was the first scenario in the Rockefeller report, which looked at several. All of the examples were created based on two different factors, political and economic alignment, and adaptive capability. Each scenario falling on either extreme of these sliding scales, with Lock Step having strong political and economic alignment and low adaptive capability.

The scenario details a world where, in 2012, a pandemic breaks out from a "new influenza strain." The disease rapidly infects "nearly 20 percent of the global population and kill[s] 8 million in just seven months." This outbreak primarily impacts the young and healthy. Already, there are some significant differences between 2020's COVID-19 and this Rockefeller report that would make it a bit extreme to use as an example to say this coronavirus was planned. However, the reaction in this scenario compared to our life's today is similar:

"The pandemic also had a deadly effect on economies: international mobility of both people and goods screeched to a halt, debilitating industries like tourism and breaking global supply chains. Even locally, normally bustling shops and office buildings sat empty for months, devoid of both employees and customers."

The report continues, detailing how leaders worldwide "flexed their authority" and required citizens to wear face masks. They even mention the new normal we are now facing with body-temperature checks in public places. Focusing on the technology industry's impact, they site the adoption of fMRI in airports, meant to detect "antisocial intent" – whatever that means.

The fear that freedom-loving Americans have today is that these strict restrictions will never ease and only continue to tighten their grip. If the Rockefeller's report is any indication as to what the future holds:

"Even after the pandemic faded, this more authoritarian control and oversight of citizens and their activities stuck and even intensified. In order to protect themselves from the spread of increasingly global problems—from pandemics and transnational terrorism to environmental crises and rising poverty—leaders around the world took a firmer grip on power."

Lock Step mentions that people are "tolerant and even eager" for the direction and restrictions at the height of the pandemic. This indeed continues to be the case in the United States right now for a large chunk of the population.

Those against these measures are wondering, what's next in this crony approach? Well, we already see it on the news – health passports. Rockefeller's report mentions this as well:

"In developed countries, this heightened oversight took many forms: biometric IDs for all citizens, for example, and tighter regulation of key industries whose stability was deemed vital to national interests."

The conclusion of the scenario planning does leave us with a glimmer of hope. Citizens start to get tired of the restrictions, but not until 2025 (for a pandemic that began in 2012). This results in the growth of resistance and a "rise of virulent nationalism." Ultimately, this sparks more organized civil unrest:

"Wherever national interests clashed with individual interests, there is conflict."

Perhaps the most disturbing aspect of these reports is not how similar the reaction by the government as been, but the absolute praise of China:

"The United States's initial policy of 'strongly discouraging' citizens from flying proved deadly in its leniency, accelerating the spread of the virus not just within the U.S. but across borders. However, a few countries did fare better—China in particular. The Chinese government's quick imposition and enforcement of mandatory quarantine for all citizens, as well as its instant and near-hermetic sealing off of all borders, saved millions of lives, stopping the spread of the virus far earlier than in other countries and enabling a swifter post- pandemic recovery… Driven by protectionism and national security concerns, nations create their own independent, regionally defined IT networks, mimicking China's firewalls. Governments have varying degrees of success in policing internet traffic, but these efforts nevertheless fracture the 'World Wide' Web."

While these odd coincidences might not allude to COVID-19 being a planned hoax by any stretch of the imagination, there are undoubtedly several overlaps that make you go, hmm… Proof that the virus was intended? Not exactly. Evidence that the Rockefeller Foundation and GBN thoroughly thought through how a government could convince its citizens to allow for abrupt authoritarianism and communistic censorship? Hmm…